The Association of Lincoln Presenters’ 21st annual conference began in Vandalia, Ill., on Thursday, April 16, 2015. The ALP Board of Directors met at the conference’s official hotel — the Holiday Inn Express & Suites — from approximately 3:30 to 5:30 p.m.

Signs reading “Lincolns,” with appropriate arrows guiding visitors from the hotel to other conference venues, were erected along the side of the roadway each day, including Thursday evening when the signs guided us to the Vandalia Country Club where we had a buffet-style supper. There, we were officially welcomed by Vandalia’s mayor, Ricky J. Gottman. Following the meal, we were serenaded by Vandalia’s own gospel music group, the FourGiven.

At 10 a.m. Friday, April 17, we met at the Old Statehouse. We were divided into four approximately equal-sized groups. While one group took a walking tour of the “Looking for Lincoln” wayside exhibits (historical markers) with the writer thereof, Dale Timmerman, another toured the Old Statehouse. A third toured the Fayette County Museum, while the fourth visited the National Road Interpretive Center. The groups rotated between these activities.

Lunch in souvenir tin pails was served at noon at the Old Statehouse. The official conference photographer was available from 1 to 3 p.m. for individual portraits at the Old Statehouse, while volunteers continued to make the Fayette County Museum, Little Brick House and National Road Interpretive Center available to visitors.

The annual business meeting convened at 3 p.m. in the Old Statehouse’s House of Representatives Chamber. President Stan Wernz (Ohio) presided. Jim Sayre (Kentucky) and Homer Sewell (Georgia) were recognized for attending each ALP conference to date. No Excellence Award was presented this year because no nominations were submitted to the Awards Committee. Lexington, Ky., with Susan Miller as hostess, was selected as the site for our 23rd (2017) conference. (Atlanta, Ga., was also up for consideration.)

A plated supper was served later that evening at the First United Methodist Church on Fourth Street within sight of the Old Statehouse. Following the meal, Professor Paul Strobel spoke to the group on “Lincoln in Vandalia: Politics and Lifestyles.” The group later removed to the Copper Penny, located directly across the street from the Old Statehouse, to have dessert and join the Abe Clymer family in a surprise birthday party for our conference host.

The next official event of the conference, a Lincoln Forum, began at 10 a.m. Friday, April 18, in the House Chamber of the Old Statehouse. The first presentation was by Terry Sprouse, author of “How Lincoln Used Stories to Touch Hearts, Minds and Funny Bones.” His talk, drawn from his book, discussed the why and how of Lincoln’s stories and how we might profit from his example. The second presentation was by ALP members Steve and Sharon Wood (New Hampshire), a short extract from their longer stage show, “The Long and Short of It.” Third came member John Mansfield (Tennessee), speaking in Lincoln character about “Lincoln’s Faith.” The fourth presentation was “The Siege of Cincinnati, Ohio (Sept. 2-12, 1862),” by Stan Wernz. The fifth presenter was our former sole overseas member, Kevin Wood, on “Lincoln in Spain” — a discussion of his experiences presenting Lincoln in Spain in both Spanish and English and about some problems in getting across the flavor of Lincoln’s oratory when in translation. Our final presenter of the forum was Linda Hanabarger, a local historian and genealogist, who reminded the group of the significance of that very room in which we were gathered, the House of Representatives Chamber, to the career and life of Lincoln.

Just before the forum concluded, Mayor Gottman and State Rep. John Cavaletto came in to greet and welcome the group. Cavaletto presented Abe Clymer with a United States flag that had flown over the Illinois Capitol.

At around 11 a.m., ALP members posed for a group photo on the steps of the Old Statehouse. Shortly before noon, a hot lunch was served on the rear lawn of the Old Statehouse, and around 1 p.m., most (if not all) of the conference attendees rode or walked in a parade through downtown Vandalia.

Following the parade, many of our members repaired to the Old State Cemetery where the “ghosts” of some of those buried there told us something about their lives and deaths. The Mary Todd Lincoln meeting and strawberry social took place from 3 to 4 p.m.

Later that evening, the membership met at the local Moose Lodge to meet and mingle with other conference registrants and interested visitors and local people. During much of our social time, we were serenaded by Bobby Elliott and Kevin Bricker, performing folk and popular music from the mid-19th century. A buffet-style supper was served at 6:30 p.m., followed an hour later with a dance to the music of the Salt Creek String Band. The festivities concluded shortly after 9:30.

Sunday brought rain, ending the warm and dry weather the conference had enjoyed until then. Conference attendees were welcomed to divine services that morning at the Vandalia First Church of God. Participation by ALP members included three hymns sung by the Lincoln Singers  and a 10-minute talk by Jim Sayre. After services, a lunch was provided by the church, supported by a free-will donation.

Take a glimpse of the Vandalia conference as seen through the eyes of the media: 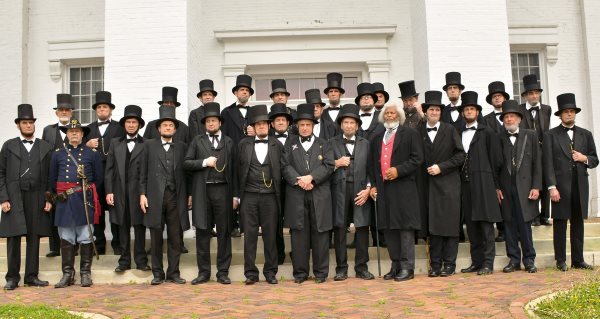 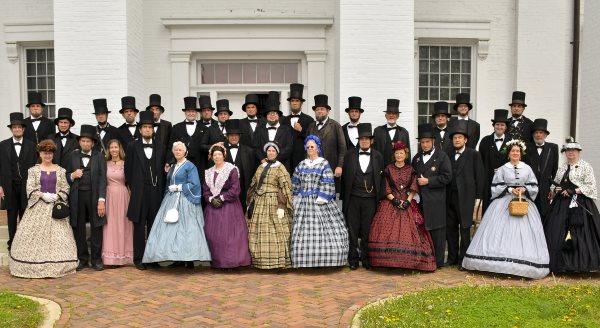 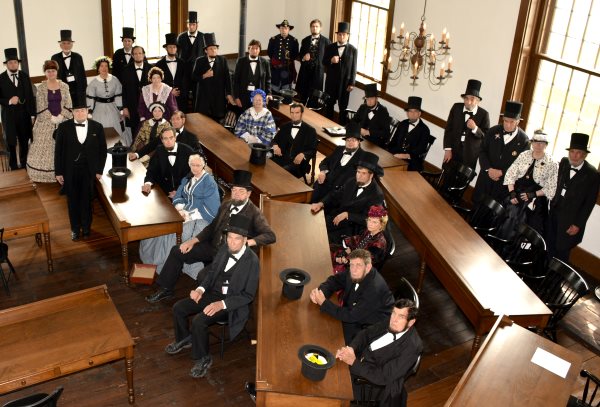