Registration for the 2016 conference of the Association of Lincoln Presenters began at 3 p.m. Thursday, April 14, in the lobby of Santa’s Lodge in Santa Claus, Ind. This was the second occasion of the ALP’s annual meeting taking place in Santa Claus. (The ninth annual conference was headquartered there in 2003.) The Board of Directors met from approximately 3:30 to 5:30 that afternoon in the lodge’s conference room.

At 7 p.m., local artist Jerry Baum shared some reminiscences of his long career in art with an audience of ALP members and local residents. At the end of his talk, a member of the audience chosen by lot received one of Baum’s original drawings – – one that was used as the cover art on the book given to each person going on the Saturday bus tour. Homer Sewell (Georgia) was the lucky recipient.

After the program, at around 11:30 a.m., ALP members met at the Bicentennial Plaza of the state park to pose for group photographs. Those who had so arranged met at noon in the Nancy Hanks Room of the Visitor Center of the Lincoln Boyhood National Monument for lunch and a presentation. Later that afternoon, plenary sessions took place in the Lincoln Chapel of the monument’s visitor center. Attendees heard about “Lincoln’s Neighbors” from local historian Michael Crews, and then about two re-enactments of Lincoln’s flatboat trip from Spencer County, Ind., to New Orleans from Duane Walters, who had participated in both trips. That evening, a barbecue-style supper was served at Santa’s Lodge. Shortly thereafter, the annual business meeting of the Association of Lincoln Presenters convened in the conference room. (See letter from ALP President Stan Wernz for highlights.)

From 9 a.m. to about 4:30 p.m. Saturday, most attendees and several interested others went on a guided bus tour of parts of southern Indiana and some adjacent parts of Kentucky with connections to Abraham Lincoln. There were two buses and a separate guide for each bus. Jim Herron, compiler of the tour guidebook, led one group while the other group was led by William Bartelt, author of “There I Grew Up.” The longest stop on the tour was at the Rockport Pioneer Village and Museum, where the group enjoyed a box lunch while visiting the site.

Activities at the Gala that evening, in addition to a buffet-style meal, included music provided by the acoustic duo Wild Mountain Thyme, a silent auction and, for an adventuresome few, dancing directed by Joan Howard (Kentucky). A Sunday morning worship service was held at the Lincoln Chapel of the Lincoln Boyhood National Memorial Visitor Center. The sermon was delivered by Joe Kamman, a local Methodist clergyman, and there was congregational singing and special music by our own Singing Lincolns. A few members stayed for the final scheduled event – a photo opportunity surrounding a tree planting on the grounds of the National Memorial at 11 a.m. 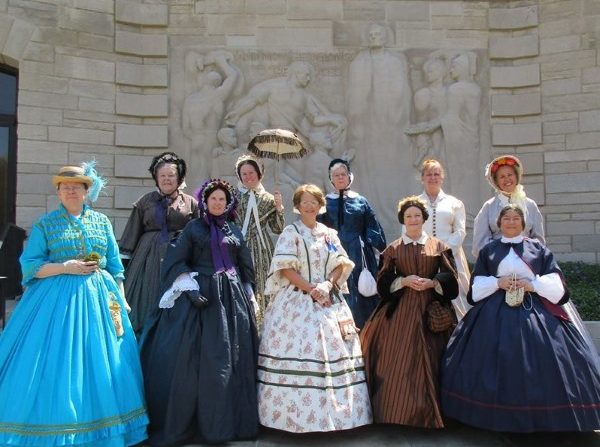